I attended 2 TEA ("Taxed Enough Already") parties on April 15, 2009. I'll post about the evening Seattle TEA party in a day or two.

There were 2 TEA parties in Bellevue, WA, one at Noon, and the other at 5:00 PM or so. I attended the noon protest, since my new contract is near downtown Bellevue. I estimated the crowd at 1,000 to 1,300. A buddy I met at the scene estimated the crowd at 600. I'm not an expert, but I am an engineer who loves numbers and statistics, I'm fairly confident with my estimate.

Both estimates are way higher than the Seattle Times estimate of 200! They said:

"Under sunny skies in Bellevue, more than 200 people gathered in a grassy park adjacent to city hall over the lunch hour, protesting government spending and taxes."

They were either intentionally misleading or very lazy in their estimate. Shame on them.

Here's a few pics from the protest.

Just a picture of part of the crowd: 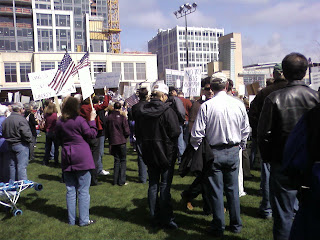 A popular message at the gathering: 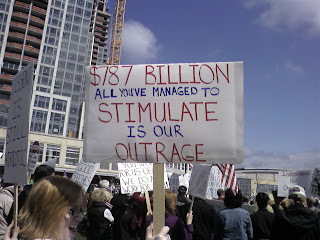 I've seen this partiotic flag guy in downtown Seattle a few times, too: 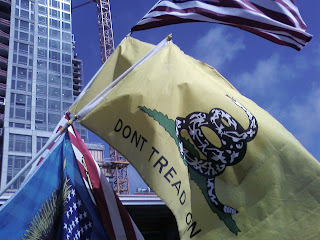 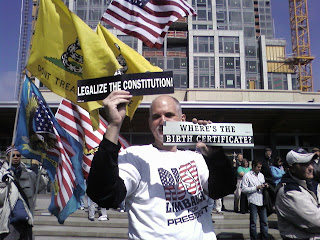 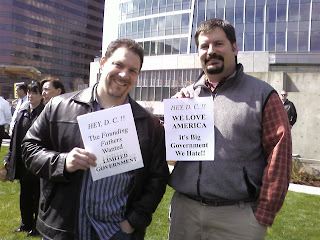 Funniest message of the day: 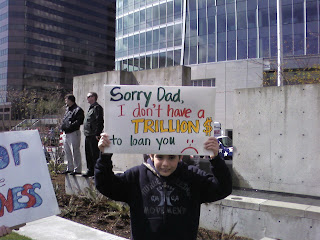